“Dino” and Jurassic friends first appeared at the 1933 “Century of Progress” World’s Fair in Chicago.

Formed by Harry F. Sinclair in 1916, Sinclair Oil is one of the oldest continuous names in the oil industry. After first appearing in Chicago, “Dino” quickly became a marketing icon whose popularity with children – and educational value – remains to this day.

With $50 million in assets, Harry Ford Sinclair borrowed another $20 million and formed Sinclair Oil & Refining Corporation on May 1, 1916.  Sinclair brought together a collection of several depressed oil properties, five small refineries and many untested leases-all acquired at bargain prices. Today known more correctly as Apatosaurus, in the 1960s a 70-foot “Dino” traveled more 10,000 miles through 25 states – stopping at shopping centers and other venues where children were introduced to the wonders of the Mesozoic era courtesy of Sinclair Oil.

Sinclair Oil began using an Apatosaurus (then called a Brontosaurus) in its advertising, sales promotions and product labels in 1930. Children loved it.

The first Sinclair “Brontosaurus” trademark made its debut in Chicago as an exhibit during the 1933-1934 “Century of Progress” World’s Fair. “Sinclair uses dinosaurs in its motor oil adverting to impress on your mind the tremendous age of the crude oils from which Sinclair Motor Oils are made,” proclaimed one Big News article. Sinclair’s first super-fuel is marketed in 1926. The “HC” initials stand for “Houston Concentrate,” but some advertising men prefer the term “High Compression.”

The Sinclair dinosaur exhibit drew large crowds once again at the 1936 Texas Centennial Exposition. Four years later, even more visitors marvelled at an improved 70-foot dinosaur in Sinclair’s “Dinoland Pavilion” at the 1939-1940 New York World’s Fair. Sinclair’s green giant and his accompanying cast of Jurassic buddies, including Triceratops, Stegosaurus, a duck-billed Hadrosaurus, and a 20-foot-tall Tyrannosaurus Rex – were again a success, especially among young people.

Although it was the first U.S. exposition to be based on the future, with an emphasis “the world of tomorrow,” the Sinclair dinosaurs remained a popular attraction among other innovative exhibits. 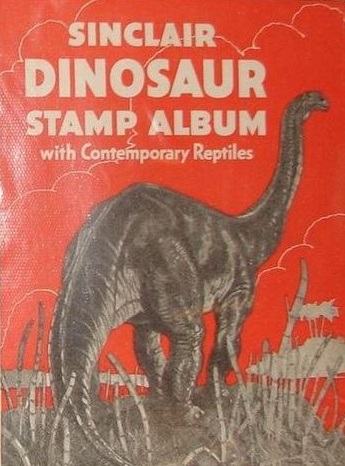 The Westinghouse Company featured “Electro the Moto-Man,” a seven-foot robot that talked and smoked cigarettes. “Dino” and company would return to New York City with even greater acclaim in 1964.

In 1935 the company began published dinosaur stamps – and a  stamp album that could be filled only with colored dinosaur stamps issued one at a time weekly at Sinclair service stations. The first printing of Sinclair’s dinosaur stamp albums – distributed through its dealers within 48 hours after a single network radio broadcast of the offer – would astound marketing professionals.

“The final totals were 4 million albums and 48 million stamps,” the company  noted about its campaign. “Dino” became an enduring icon of successful petroleum marketing wherever it went. Refurbished, the 70-foot-long fiberglass green giant and his eight companions – including a large, 45-foot Tyrannosaurus Rex – will return to New York for another world’s fair in 1964-1965.

Fifty million New York City visitors attend the 1964-1965 New York World’s Fair – with the Sinclair Corporation’s “Dinoland” exhibition among the most popular of all. Spectators in 1964 were amazed to see a barge of dinosaurs on the Hudson River.

In early 1964, spectators along the Hudson River were amazed to see a barge crowded with an improved Dino and his kin floating downriver. The super-sized reptiles were again bound for a New York World’s Fair. One, Triceritops, was delivered by helicopter.

“For the first time in 70 million years a herd of dinosaurs will travel down the Hudson River this month,” noted the September 1963 issue of Popular Science. “Faithfully sculptured and big as life,” noted the magazine, the fiberglass dinosaurs traveled by barge from the Catskill Mountains studio of animal sculptor Louis Paul Jonas, his 18 assistants and paleontologist advisers. Dismantling of “the great statue that stood in the Sinclair Pavilion of the New York World’s Fair, 1965.” Photo by Robert Walker, the New York Times Archives.

The nine dinosaurs took two months and $250,000 to complete by opening day, April 22, 1964. By the end of the World’s Fair, about 50 million visitors had marvelled at Sinclair’s “Dinoland” exhibit. Dino’s travels did not end when the fair closed in October 1965.

After being disassembled and configured for an extended road trip, Dino began visiting shopping centers and other venues where crowds of children were introduced to the wonders of prehistory, courtesy of Sinclair. In July 1966, the Sinclair Dinoland exhibit visited Southdale Mall in Edina, Minnesota, where Andy and Doug Ward were photographed by their father David in front of Triceratops. Photo courtesy Doug Ward. One of the New York World’s Fair dinosaurs would end up in Kansas.

After traveling more 10,000 miles through 25 states and 38 major cities, Dino retired to Dinosaur Valley State Park in Glen Rose, Texas, about 50 miles southwest of Fort Worth. He can still be seen there today. The Texas park contains some of the best preserved dinosaur tracks in the world.

“There are two fiberglass models,” the park notes, “a 70-foot Apatosaurus and a 45-foot Tyrannosaurus Rex. They were built, under commission of the Sinclair Oil Company, for New York World’s Fair Dinosaur Exhibit of 1964 – 1965.” Although Sinclair was born in Benwood, West Virginia, today a Wheeling suburb, he grew up in Independence, Kansas. The Historical Museum of Independence educates visitors with an Oil Room exhibiting Sinclair’s extensive Mid-Continent oilfield production and refining heritage.

On display in a nearby public park is Corythosaurus – one the dinosaurs from Sinclair’s “Dinoland” exhibit at the 1964-65 New York World’s Fair. The museum’s Old Post Office building was placed on the National Register of Historic Places in 1988.

“The museum’s permanent exhibits in 22 rooms tell stories of the early settler’ lifestyle; the history of the oil industry; some of the Indian Culture collection and various historical artifacts,” explains the Historical Museum of Independence.

Although later a respected American industrialist, Harry Sinclair was implicated in the 1920s Teapot Dome Scandal. He served six months in prison for jury tampering. He died on November 10, 1956. 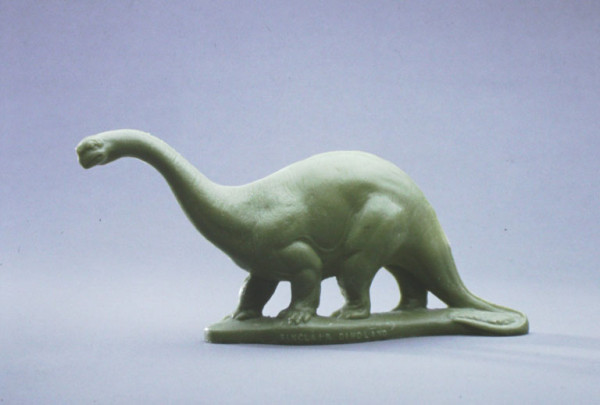 More than a few young New Work World’s Fair visitors recall Sinclair’s “Mold-A-Rama” machine that made a plastic souvenir dinosaur for 25 cents. “See it formed right before your very eyes!” Children watched as two sides of a mold came together before issuing a dinosaur, still warm.