The history of Con Edison includes stories of work crews from New York City’s many competing gas companies digging up lines of rivals – and literally battling for customers, giving rise to the term “gas house gangs.” 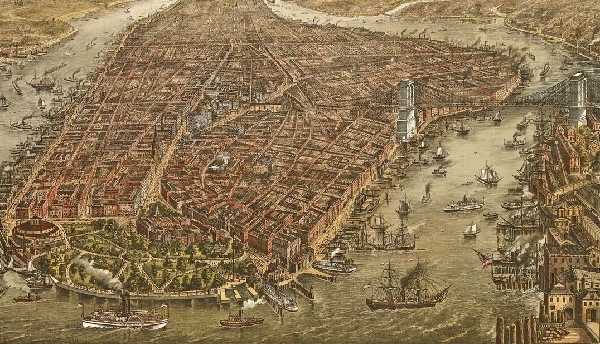 New York gas-light companies provided lighting for streets, businesses and residences beginning in 1823. They later merged to become the nation’s largest utility – Con Edison. This 1873 “bird’s eye view” illustrates New York and Brooklyn. The Brooklyn Bridge, under construction from 1870 to 1883, is at right. Courtesy Library of Congress.

“Before the Brooklyn Bridge spanned the East River, before the Statue of Liberty first graced New York Harbor, and before skyscrapers rose above New York City’s streets, the utility companies that would eventually become Con Edison were already building the energy infrastructure needed to fuel and sustain the city’s growth,” notes one historian.

In 1823, New York Gas received a charter from the New York State Legislature to serve all of Manhattan south of an east-west line created by Grand, Sullivan, and Canal Streets.

“Like most early gas companies, New York Gas would focus its efforts on street lighting, in this case, supplementing or replacing the whale-oil lamps that were installed by the city beginning in the 1760s,” explains the Con Edison website. Manufacturing gas from coal, in 1833 the Manhattan Gas Light Company began to provide service to Manhattan above Grand and Canal streets.

Another “coal gas” company came on the scene in 1855 when the Harlem Gas Light Company received a city franchise to serve customers north of 79th Street. In 1858, the Metropolitan Gas Light Company got a city-wide charter – and went into direct competition with the existing gas companies. More companies organized, including New York Mutual Gas Light in 1866 and the Municipal Gas Light Company in 1876. the company reports.

“With six major gas companies serving New York City, the streets were constantly being torn up by one company or another installing or repairing their own mains – or removing those of a rival,” explains the Con Edison website. From time to time, work crews from competing companies would inadvertently meet on the same street and literally battle for customers, giving rise to the term “gas house gangs.”

In May 1880, the city’s major gas companies reached an agreement on the price of gas and ended the construction of competitive mains,” the website adds. “It was a business arrangement that would be unlawful today but was legal, and sensible, at the time.”

Just as company executives were looking forward to the financial stability and profitability the agreement would bring, a new problem was brewing, Con Edison notes. 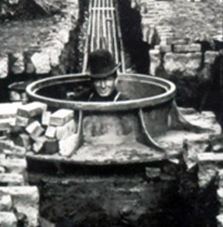 In December 1879, Thomas Edison had demonstrated his newest invention — the incandescent light bulb. As electric lamps quickly became the light of choice, the New York gas companies countered by finding new uses for their product – especially using gas for heating and cooking.

But the future survival of the gas business seemed to depend on joining forces. Consolidated Gas Company will result from the November 11, 1884, merger of New York, Manhattan, Metropolitan, Municipal, Knickerbocker and Harlem gas companies.

In 2018, Con Ed distributed steam, electricity and natural gas to more than one million customers in Manhattan, the Bronx, Queens, and most of Westchester County. More than 4,200 miles of gas mains and nearly 400,000 service pipes transport natural gas from the producing fields of Texas, Louisiana, the Gulf of Mexico.

Thirty percent of the largest U.S. utility’’s natural gas comes from Canada, although the growing increase in local gas production (the prolific Marcellus shale of New York and Pennsylvania shale) may change this. Learn about the history of New York’s petroleum industry – which began in 1865 – at the Pioneer Oil Museum of New York in Bolivar.