Innovative 1920s technology for protecting oil and natural gas wells – and the environment. 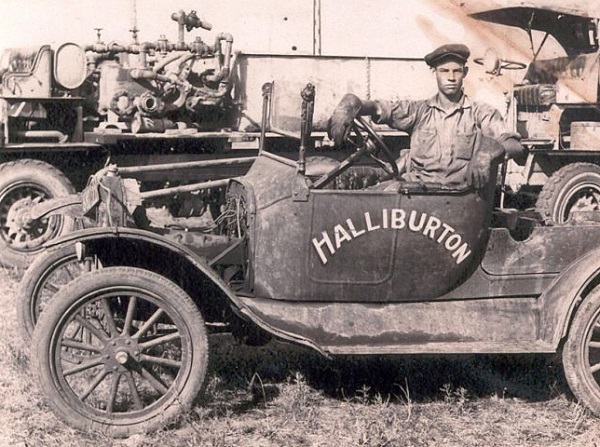 George Halliburton, one of Erle P. Halliburton’s younger brothers, posed confidently in a Model T Ford around 1929. “George, my grandfather, and several of E.P.’s brothers were employed with the company for many years,” noted Cole Halliburton, Halliburton Operating Company president, in 2020. An early Halliburton self-propelled truck with pumps for cementing wells can be seen in background. Photo courtesy Timothy Johnson.

Erle P. Halliburton received a 1921 patent for an improved method for cementing oil wells, helping to bring greater production and environmental safety to America’s oilfields. When he patented his “Method and Means for Cementing Oil Wells,” the young inventor revolutionized how wells were completed after drilling. In 1919, Halliburton was 27 years old when he founded his oilfield equipment and service company headquartered in Ardmore, Oklahoma. The New Method Oil Well Cementing Company would receive many patents on its way to becoming today’s Halliburton. He had recently moved to Ardmore and the nearby Healdton oilfield after working in the booming fields of Burkburnett, Texas.

“It is well known to those skilled in the art of oil well drilling that one of the greatest obstacles to successful development of oil bearing sands has been the encountering of liquid mud water and the like during and after the process of drilling the wells,” Halliburton noted in his June 1920 U.S. patent application.

Halliburton’s patent awarded on March 1, 1921, explained that a typical well’s production, hampered by water intrusion that required time and expense for pumping out, “has caused the abandonment of many wells which would have developed a profitable output.”

The improved well cementing process isolated the various down-hole zones, guarded against collapse of the casing, and allowed better control of the well throughout its producing life.

Learn more about well production history in All Pumped Up – Oilfield Technology. A statue dedicated in 1993 in Duncan, Oklahoma.

After World War I, as Halliburton struggled to set up cementing operations in Texas, many oil companies were skeptical of cementing casing, according to the former editor-in-chief of E&P magazine.

“Most wells were doing well, they reasoned, without the new-fangled technology and there was, in the back of their minds, the question of possible well damage resulting from cementing,” explained Bill Pike in a 2007 article.

“For Halliburton, it was to be an uphill struggle to normalize the practice of cementing a well,” Pike added.

“It is safe to say that in the first half of the 20th century, the formative years, Halliburton dominated the development of cementing technology,” Pike proclaimed in Cementing is not for Sissies, where he also also noted: One of the earliest self-propelled Halliburton cementing trucks includes a jet mixer at the rear of the truck on the left. Halliburton photo courtesy E&P magazine.

“Halliburton was ever the tinkerer. He owned nearly 50 patents. Most are oilfield, and specifically cementing related, but the number includes patents for an airplane control, an opposed piston pump, a respirator, an airplane tire and a metallic suitcase.”

For years Halliburton’s only real competitor in the oilfield service industry was R.C. (Carl) Baker of Coalinga, California. Baker Oil Tools also held around 50 patents, including a Gas Trap for Oil Wells in 1908, a Pump-Plunger in 1914, and a Shoe Guide for Well Casings in 1920.

Almost three decades after his Method and Means for Cementing Oil Wells patent, Halliburton would develop yet another industry-changing oilfield technology.

On March 17, 1949, Halliburton Oil Well Cementing Company and Stanolind Oil Company completed a well near Duncan, Oklahoma: It was the first commercial application of hydraulic fracturing, a process that dramatically increased oil and natural gas production.

Today, cement is first used soon after a well has been spudded – the beginning of drilling operations. The surface hole is lined with steel casing and cement to protect freshwater aquifers. (Edwin L. Drake, who in 1859 drilled the first U.S. oil well next to a creek, invented a “drive pipe.”) Steel casing is installed in the surface hole to prevent the contamination of freshwater zones. (A) The conductor pipe has been cemented into place. Cement is pumped down the inside of the casing. (B) The cement in the bottom of the casing has been drilled out so that drilling can be resumed. Illustration courtesy the Kansas Geological Survey.

According to the Kansas Geological Survey (KGS) Petroleum: a primer for Kansas in 2001, the surface hole may be several hundred or several thousand feet deep. When the predetermined depth is reached, drilling pauses so steel casing can be inserted. A 1939 issue of “The Cementer,” a Halliburton Oil Well Cementing Company magazine.

To strengthen the well and protect the environment, cement is then pumped down the surface casing to fill the space between the outside of the casing and the well bore all the way to the surface. This insures the protection of freshwater aquifers and the security of the surface casing.

KGS notes that the casing and the cement typically would be tested under pressure for 12 hours before drilling operations resume. A vital piece of equipment for controlling pressure – the blowout preventer – will be attached at the top of the surface casing.

When drilling has reached total depth and after well-logging and other tests have been completed and analyzed, petroleum company executives must decide whether to complete the well as a producing well – or plug it as a dry hole.

The KGS explains that if the well is to be plugged and abandoned as a dry hole, the well bore is filled with a drilling fluid with additives that prevent its movement from the well bore into the surrounding rock.

Several cement plugs can be used within the well bore at intervals where porosity has been detected, KGS adds. This isolates the porosity zones – and prevents movement of fluids from one formation to another. (A) The casing shoe makes it easier to insert the casing into the bore hole. The float collar prevents drilling fluid from entering the casing. The bottom plug precedes the cement down the casing, and the top plug follows the cement. (B) The production casing can be perforated when the cementing operation is completed. Kansas Geological Survey illustration.

If a decision is made to complete the well as a producer, more casing is delivered to the site and the cementing company called.

“The well bore is filled with drilling fluid that contains additives to prevent corrosion of the casing and to prevent the movement of the fluid from the well bore into the surrounding rock,” notes KGS. Casing may be inserted to a total depth of the hole or a cement plug may have been set at a specific depth and the casing set on top of it.”

“After the cementing of the casing has been completed, the drilling rig, equipment, and materials are removed from the drill site,” says KGS. “A smaller rig, known as a workover rig or completion rig, is moved over the well bore. The smaller rig is used for the remaining completion operations.”

A well-perforating company is then called to the well site, adds the KGS article, because it is necessary to perforate holes in the casing at the proper position to allow the oil and natural gas to enter the casing. Learn more in Downhole Bazooka. Also see Halliburton and the Healdton Oilfield.